The modern land use statistics are random sample surveys based on a point sample grid of 100 m spacing composed of regularly updated, superimposed aerial photographs of a fixed position. From the third survey cycle, interpretation was made on the basis of digital, scanned aerial images using photogrammetric workstations, enabling 3D imaging. The 2004/09 survey, whose methodology was entirely revised in relation to the 1992/97 land use statistics, produced a new, up-to-date data set and revised the results of the two previous surveys.

Since that time, data on land cover and land use have been collected separately, so that each sample point has two codes, which can be evaluated individually (for "cover" or "use") but also in almost any combination. The 2004 standard classification (NOAS04) comprises 72 such combined basic categories. Statistical reliability (significance) can be improved, especially for small-scale evaluations, by grouping these categories together to form a smaller number of aggregated groups. For this reason, the FSO makes available not only geodata with all basic categories, but also results for 17 and 27 classes:

Classes of the standard classification 2004

Further information on the classification 2004 and the different basic categories can be found in the FSO web portal (in French). 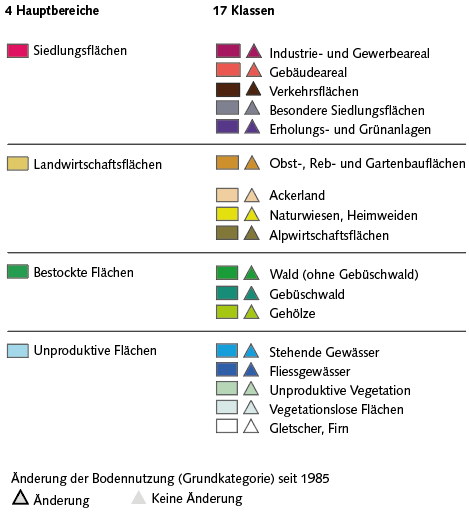 Besides geodata, statistical results tabulated for cantons and communes are also available (in French).