Since that time, data on land cover and land use have been collected separately, so that each sample point has two codes, which can be evaluated individually (for "cover" or "use") but also in almost any combination. The sub-classification of the new 2004 classification (NOLC04), developed to describe land cover, comprises 27 basic categories, grouped together in six main areas.

Categories of the land cover classification 2004 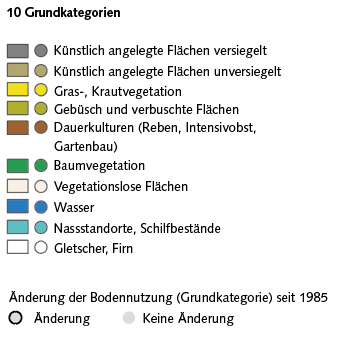 Besides geodata, statistical results tabulated for cantons and communes are also available in French.